Combined Mitral Valve Replacement and Ravitch Procedures in a Patient with Previous Pneumonectomy: Case Report and Review of the Literature

Introduction: Significant anatomical and functional changes occur following pneumonectomy. Mediastinal structures displace toward the side of the resected lung, pulmonary reserve is reduced. Owing to these changes, surgical access to heart and great vessels becomes challenging, and there is increased risk of postoperative pulmonary complications.
Methods: We performed a mitral valve replacement combined with a Ravitch procedure in a young female with previous left pneumonectomy and pectus excavatum.
Results: She was discharged on postoperative day 9 and remains symptom-free 3 months after surgery.
Conclusion: Thorough preoperative evaluation and intensive respiratory physiotherapy are essential before performing cardiac operations on patients with previous pneumonectomy.

Significant anatomical and functional changes occur following pneumonectomy. Mediastinal structures displace toward the side of the resected lung, pulmonary reserve is reduced, and the remaining lung compensatorily enlarges and herniates over the midline with elevation of the diaphragm[1,2]. Owing to these changes, surgical access to the heart and great vessels becomes challenging, and there is an increased risk of postoperative pulmonary complications.

A 24-year-old female patient presented to our clinic with dyspnea. She had undergone a left pneumonectomy for advanced and complicated bronchiectasis 10 years ago.

She had marfanoid habitus, pectus excavatum, scoliosis, and a grade 4, pansystolic, high-pitched, blowing murmur best heard at the right sternal border (Figures 1A and B).

Fig. 1 - Marfanoid habitus and pectus excavatum. A) front view; B) side view. 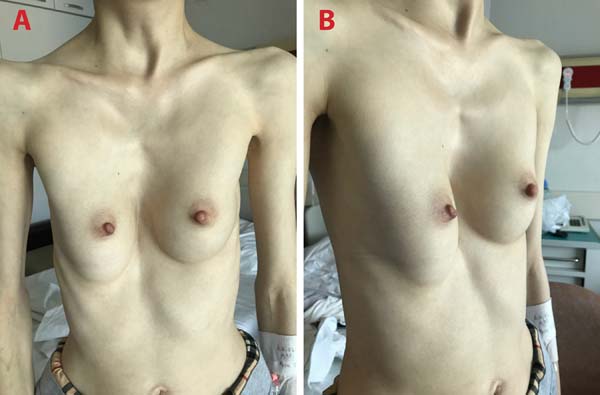 Fig. 1 - Marfanoid habitus and pectus excavatum. A) front view; B) side view.

Transthoracic echocardiogram revealed severe mitral regurgitation due to myxomatous mitral valve with bileaflet prolapse and chordal elongation, secondary pulmonary hypertension, and tricuspid regurgitation with a dilated right atrium. Her ejection fraction was 35%, left ventricle end-diastolic diameter was 72 mm, and end-systolic diameter was 59 mm. She also had a borderline ascending aortic aneurysm measuring 40 mm in diameter. Pulmonary function test demonstrated reduced forced vital capacity (FVC), 1.11 L (31.7% of predicted), and reduced forced expiratory volume in 1st second (FEV1), 1.05 L (34.6% of predicted). A contrast-enhanced computed tomography (CT) scan was performed to examine the mediastinal structures and alternative cannulation sites (Figure 2). Heart and great vessels were displaced to the left, and the right lung was enlarged and crossing the midline, anterior to the heart. The proxymal ascending aorta was 40 mm in diameter. Additionally, a chronic type B aortic dissection was present. CT scan revealed that the ascending aorta and the superior and inferior venae cavae were suitable for cannulation. 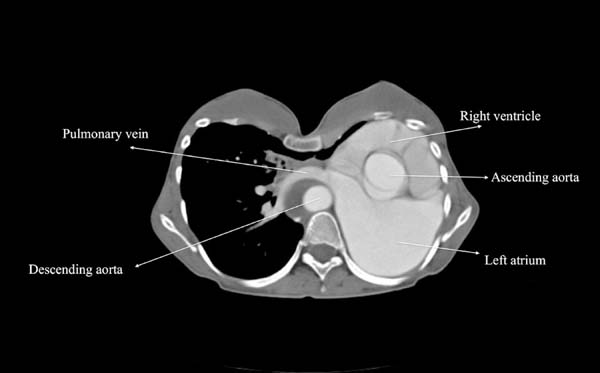 A vertical midline incision on skin, subcutaneous tissues, and pectoralis fascia was made over the sternum. Following elevation of pectoralis muscles from the anterior chest wall, a median sternotomy was performed. Costal cartilages of the 3rd to 8th ribs were removed. The right lung was retracted from the midline. Cardiopulmonary bypass (CPB) was initiated via ascending aortic and bicaval cannulation, and cardiac arrest was obtained. We did not use topical cardiac hypothermia to prevent phrenic nerve injury. Both atria were relatively easy to expose due to leftward shift and rotation of the heart. A mitral valve replacement and a tricuspid ring annuloplasty was performed using biatrial approach. CPB was terminated. A bar was placed behind the sternum and fixed to the pectoralis muscle fibers bilaterally. After completion of the Ravitch procedure, the sternum was closed. The patient was transferred to a dedicated cardiac surgery intensive care unit and she was successfully extubated at the postoperative 6th hour. Her recovery was uneventful and she was discharged on postoperative day 9 (Figures 3A and B).

Fig. 3 - Early postoperative results. A) front view; B) side view. 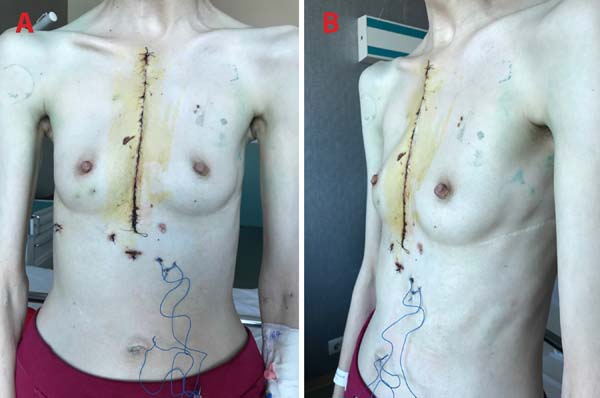 Fig. 3 - Early postoperative results. A) front view; B) side view.

The patient remains symptom-free 3 months after surgery and she is scheduled to have a bar removal 3 months later (Figures 4A and B).

Fig. 4 - Late postoperative results. A) front view; B) side view. 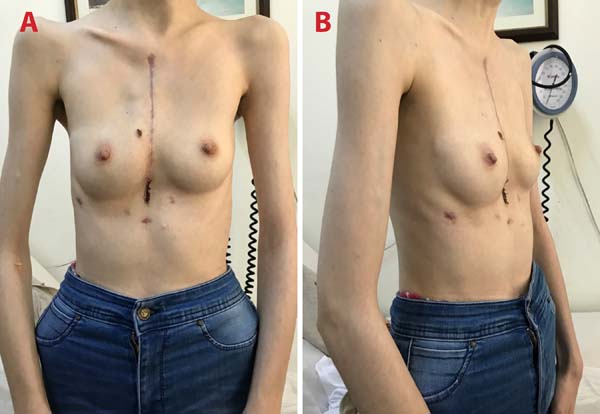 Fig. 4 - Late postoperative results. A) front view; B) side view.

The Figure 5 presents a timeline of interventions and outcomes. 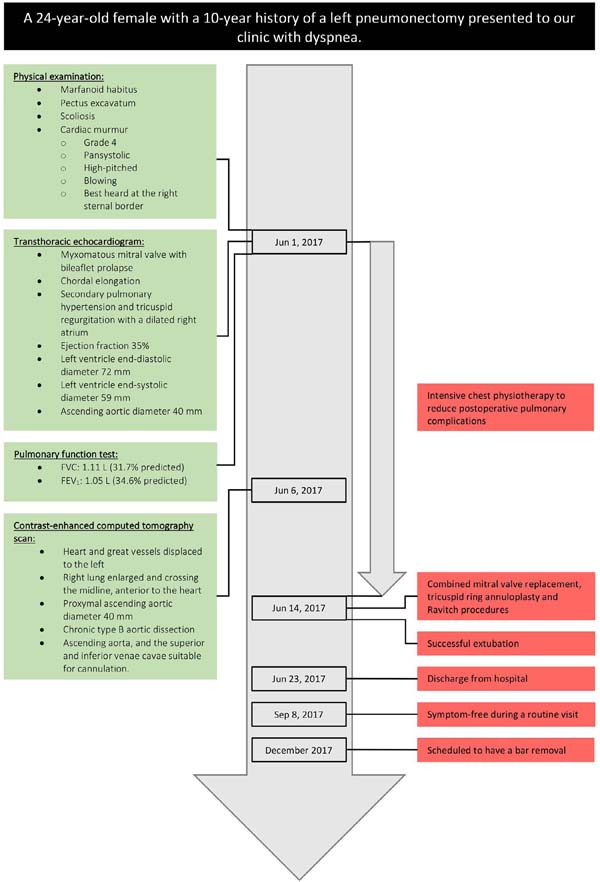 After conducting a Medline search from 1966 to April 2018 using the search terms "pneumonectomy" and "open heart surgery" or "coronary artery bypass" or "mitral valve" or "aortic valve" or "revascularization", we identified 30 articles in English language[3-34]. A total of 42 cardiac operations were performed on 38 patients, including the current one (Table 1). The mean patient age was 65.2 years (range: 24-83 years). Twenty-one (76.3%) patients were male. There were 20 (47.6%) isolated coronary artery bypass grafting (CABG) procedures, 18 (42.8%) valvular procedures, and 4 (9.5%) combined CABG and valvular procedures. Two of these operations were transapical aortic valve implantation procedures (patients 29 and 30)[26,27].

The preferred surgical incision was a median sternotomy in 26 (61.9%) cases, a left thoracotomy in 9 (21.4%) cases, a right thoracotomy in 6 (14.2%) cases, and it was not specified in 1 (2.3%) case. Patients 35 and 37 underwent surgery utilizing video-assisted right thoracotomy[32,34]. Among 24 CABG operations, a left internal thoracic artery was used as a bypass conduit in 7 (29.1%) cases. The use of a right internal thoracic artery was not reported. Complete arterial revascularization was performed in 2 (8.3%) cases. Among 20 isolated CABG operations, 7 (35%) were carried out without the use of CPB.

Six months after pneumonectomy, FVC decreases by 36% and FEV1 by 34%. These parameters do not significantly improve beyond 6 months[2]. Considering that the pulmonary function may deteriorate significantly after cardiac surgery even in patients who have normal preoperative respiratory function, previous pneumonectomy poses a great risk of postoperative pulmonary complications[35]. Hulzebos et al.[36] found preoperative inspiratory muscle training to be effective in preventing postoperative pulmonary complications in high-risk patients undergoing elective CABG surgery. Conventional measures such as avoidance of phrenic nerve injury and fluid overload, early extubation, early mobilization, and postoperative chest physiotherapy should be utilized. Central venous line should be placed on the side of the pneumonectomy to avoid pneumothorax.

Considerable anatomical changes occur in long-term survivors after pneumonectomy. Smulders et al.[1] evaluated the function and position of the heart using dynamic magnetic resonance imaging (MRI) in 15 patients who underwent pneumonectomy at least 5 years ago. They reported that although varying degrees of mediastinal shift occur in all patients, right-sided pneumonectomy is mostly associated with a lateral shift and only a minor rotation, whereas left-sided pneumonectomy leads to a greater degree of rotation[1]. Whether the patient had a left or right pneumonectomy, it affects the choice of surgical approach. For instance, in the case of a previous left pneumonectomy, it may be easier to bypass left-sided coronary arteries through a left thoracotomy, rather than a median sternotomy, and mitral and tricuspid valves may be inaccessible from the usual right thoracotomy. Stoller et al.[19] reported difficult exposure of the mitral valve through a median sternotomy in a patient who underwent a left pneumonectomy 9 years ago. However, we found it relatively easy to perform a mitral valve surgery in a similar setting. Because long-term anatomical changes after pneumonectomy vary considerably among patients, preoperative CT and/or MRI should be performed to assess the exact locations of cardiac structures and cannulation sites[37]. Decision of surgical approach should only be made after carefully examining the extent of the shift and the rotation of the cardiac structures.

Another subject that needs addressing is the concomitant pectus excavatum. Schmidt et al.[38] advocate simultaneous correction of the pectus excavatum in patients requiring cardiac surgery. We resected deformed cartilages prior to sternotomy to improve surgical exposure as previously reported by Sacco-Casamassima et al.[39].

Cardiac operations on patients with previous pneumonectomy can be performed with a favourable outcome. Thorough preoperative evaluation with imaging studies to assess cardiac position and function and intensive respiratory physiotherapy are essential.

IK Substantial contributions to the conception or design of the work; or the acquisition, analysis, or interpretation of data for the work; drafting the work or revising it critically for important intellectual content; final approval of the version to be published

ACT Substantial contributions to the conception or design of the work; final approval of the version to be published

KO Substantial contributions to the conception or design of the work; final approval of the version to be published

YO Substantial contributions to the conception or design of the work; final approval of the version to be published

AB Substantial contributions to the conception or design of the work; final approval of the version to be published

MY Substantial contributions to the conception or design of the work; final approval of the version to be published