Syphilis is an infectious disease transmitted mainly through sexual intercourse and that can have several presentations at various stages [1]. Tertiary syphilis, now rare due to effective antibiotic treatment already in use for several years, is responsible for cardiovascular syphilitic lesions [2,3]. Among the lesions, the most common is the syphilitic aortitis. In untreated syphilis, aortitis may manifest after 10 to 40 years after the initial sexual contact [2,3]. The ascending aorta is affected in 50% of the cases, followed, in descending order, the aortic arch, the descending aorta and abdominal aorta, with possible impairment of coronary ostia and aortic valve [2,4].

The main cause of death occurred in about 80% of cases, and rupture of saccular aneurysms, when not treated surgically [4].

After primary infection, there is the presence of Treponema pallidum in the aortic wall, initially in the adventitia and soon after in the lymphatic vessels. This is one of the main reasons for the tropism of spirochetes in relation to the ascending aorta, since it is rich in lymphatics [2,4].

The vasa vasorum undergoes a process of endarteritis obliterans, necrosis of medial layer (mesoarteritis), and infiltration of plasma cells. Consequently, the elastic tissue of the vessel is destroyed and replaced by scar tissue. The inflammatory process may continue for a long time and can be found until 25 years after initial infection [2,5].

The clinical presentation may be of angina when there is obstruction of the coronary ostia, dyspnea, when there is aortic failure. However, the most common clinical symptom is chest pain secondary to rapid expansion of the luetic aneurysm [2].

48-year-male patient, brown. His main complaint was "shortness of breath". The patient reported that he noticed dyspnea on efforts for one year. He did not undergo follow-up. Dyspnea was increasing steadily and currently had dyspnea on moderate effort, accompanied by non-characteristic chest pain. This pain has drawn attention from family members, who opted for medical advice. History of promiscuity, with a case of gonorrhea of difficult treatment for 30 years. He denies family heart disease or other comorbidities, without using drugs.

On cardiac auscultation presented holodiastolic blow in all outbreaks, predominantly in the aortic area. Lungs were clear. No other significant changes on physical examination. 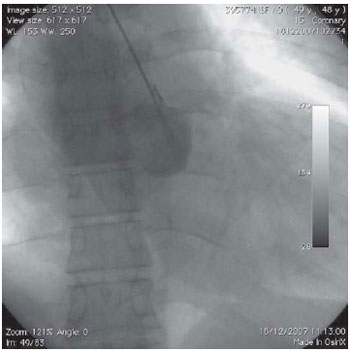 Fig. 1 - Aortography showing enlargement of the ascending aorta and reflux of contrast to the left ventricle, demonstrating the aortic failure

Surgical approach was performed through median thoracotomy, cannulation of the aorta, superior and inferior vena cava. Cardiopulmonary bypass (CPB), clamping of the ascending aorta, cardioplegic solution infused into the coronary ostia were initiated. The incision was performed earlier in the ascending aorta with visualization of the failed aortic valve and the ascending aortic wall with calcification and signs of degeneration. The patient then underwent aortic root reconstruction with implantation of a valved Dacron tube 25 (Figures 2 and 3). Total CPB time was of 100 minutes. The surgery was uneventful. 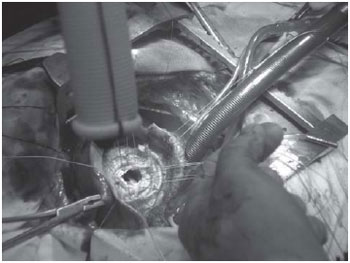 Fig. 2 - Surgical field at the time of insertion of the Dacron tube. Visualization of the aortic valve and tube 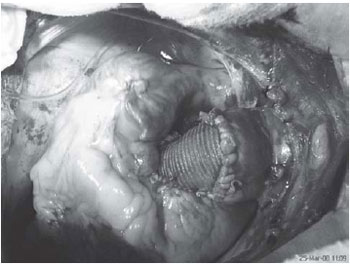 Fig. 3 - Dacron tube positioned between the aortic root and its proximal third

Due to the degenerative appearance of the aortic root, diagnostic tests for syphilis were then requested. The result of VDRL, 1:32, and FTA-ABS-IgG antibody reagent. Anti-HIV negative.

The aorta was submitted to histopathologic study (Fig. 4), which returned the following report: adventitia showing foci of cellular infiltrate with lymphocyte predominance; vasa vasorum with signs of thickening of the intima, tunica media with signs of focal ischemia, small areas of necrosis, plasma cell infiltration; intima with atherosclerotic plaques. 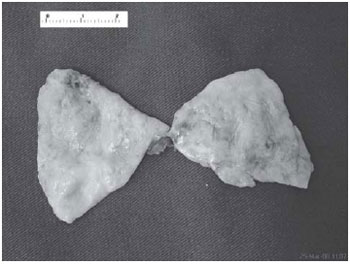 Patient recovered uneventfully and was discharged nine days after surgery, with the treatment regimen for syphilis tertiary.

The basic lesion of cardiovascular syphilis is aortitis. Myocarditis and myocardial syphilitic gums are rare. There is, not infrequently, an association of this lesion with coronary heart disease due to the presence of contiguity [2]. The case described showed no such association, confirmed by cardiac catheterization and during surgery, although the chest pain reported by patients.

Valvular involvement in the case described is due to enlargement to the aortic annulus followed by dilation of the aorta. There is often a direct involvement to the valves by the disease, but due to a condition of severe regurgitation was necessary to replace it.

The patient presented heart failure due to the presence of chronic aortic regurgitation untreated. No syphilitic myocardial lesions were found.

There is the availability of more sensitive laboratory tests (such as computed tomography), which are of choice in cases of aortic lesions [2], but the echocardiogram and cardiac catheterization were enough to define the lesion with sufficient accuracy, for surgery.

During the surgery, immediately after thoracotomy, it was observed that the aortic root had a rough exterior and yellow coloring. At the touch, the aorta was hardened and presented irregularities. It was then suggested the diagnosis described.

Other diagnoses were considered - the giant cell arteritis (or temporal arteritis) and Takayasu's arteritis - due to the involvement of the aorta by both diseases. Despite the giant cell arteritis involves large-caliber arteries, such as temporal, carotid and vertebral arteries and aorta, it most commonly affects the elderly. However, the Takayasu's arteritis, which also involves large arteries, mainly through stenotic inflammatory lesions of the aorta and its primary branches, most commonly affects young women [6]. Both diseases were excluded due to clinical and serological confirmation of the underlying disease of the patient.

The postoperative treatment with benzathine penicillin, in doses recommended for tertiary syphilis, is regularly implemented to decrease the chances of relapse. However, it is known that even with the elimination of Treponema Pallidum in the system, the chance of recurrence of the disease still persists [3]. Because of this, there is a need for a long-term follow-up of the patient.

Syphilitic aortitis is a manifestation of acquired syphilis, not occurring in congenital syphilis. Currently, the manifestations of tertiary syphilis are less common due to the advent of penicillin therapy [2]. But we must consider that there is a direct relationship with the patient's socioeconomic conditions and development of disease.

Treatment of severe syphilitic aortitis is surgery. The diagnosis of syphilitic aortitis is not currently contemplated by the rarity of the case, because the current treatment with antibiotics is largely complete and, if treated properly, is extremely effective. In this case, the surgeon's experience was capital to the diagnosis, since it was not considered the hypothesis before the observation of the aortic lesion. In Brazil, we still have important socio-cultural conflicts, reflecting the social health - leading syphilis as a possible diagnosis.