Introduction: Renal function is an independent risk factor for mortality among on-pump coronary bypass grafting (ONCABG) patients. This association is well known in the international literature, but there is a lack of knowledge of how admission creatinine (AC) levels modulate each cardiovascular risk factor.
Objective: The aim of this paper was to assess the effect of different AC levels on mortality among ONCABG patients.
Methods: 1,599 patients who underwent ONCABG between December 1999 and February 2006 at Hospital de Base in São José do Rio Preto/SP-Brazil were included. They were divided into quartiles according to their AC levels (QI: 0.2 =AC < 1.0 mg/dL; QII: 1.0 = AC < 1.2 mg/dL; QIII: 1.2 = AC < 1.4 mg/dL; and QIV: 1.4 = AC = 2.6 mg/dL). Seven risk factors were then evaluated in each stratum.
Results: Mortality was higher in the QIV group than QI or QII groups. Factors such as age (= 65 years) and cardiopulmonary bypass (CPB) time (= 115 minutes) in QIV, as well preoperative hospital stay (= 5 days) in QIII, were associated with higher mortality rates. Creatinine variation greater than or equal to 0.4 mg/dL increased mortality rates in all groups. The use of intra-aortic balloon pump and dialysis increased mortality rates in all groups except for QII. Type I neurological dysfunction increased the mortality rate in the QII and III groups.
Conclusion: Creatinine levels play an important role in ONCABG mortality. The combination of selected risk factors and higher AC values leads to a worse prognosis. On the other hand, lower AC values were associated with a protective effect, even among elderly patients and those with a high CPB time.

Cardiovascular diseases (CVDs) are the main cause of death in Brazil. According to the Brazilian Department of Public Healthcare Data (DATASUS), in 2014, there were 340,284 CVD-related deaths in the country, which represented approximately 23% of all deaths in that year. Out of all cases of CVD, 60% involved ischemic diseases and myocardial infarction[1]. The Brazilian government spent BRL$13.5 billion on healthcare in that same year, and approximately 2.5% of that amount was directly applied to coronary artery bypass grafting (CABG) procedures alone or in combination with another procedure[1].

In an attempt to decrease the mortality rate and hospital costs of cardiovascular (CV) patients, a group of authors studied data from 132 centers from eight different countries in Europe to identify risk factors in which they could predict a patient's odds of dying. One of these initiatives, which is now used around the world, is known as the EuroSCORE[2]. Although EuroSCORE has been able to accurately predict mortality rates for European patients, it has failed when applied to Brazilian patients[3].

Lisboa et al.[4] evaluated the applicability of EuroSCORE II at their institution and concluded that EuroSCORE II could not accurately foresee mortality rates for their patients; they decided to use a local scoring system. Santos et al.[5] assessed 1,628 on-pump coronary artery bypass grafting (ONCABG) patients and found seven (pre-, intra- and postoperative) mortality risk factors and established cutoff values for each of them for their local population. The behavior of these risk factors is still unknown in cases in which the patient has a different admission creatinine (AC) value, which is another important risk factor.

The aim of this paper was to assess the effect of different AC levels on mortality among ONCABG patients.

This study was approved by the local Ethics Committee under number 454,518, and informed consent was waived due to the retrospective nature of the study.

From December 1999 to February 2006, 1,674 ONCABG patients from Hospital de Base of the city of São José do Rio Preto, São Paulo state, Brazil, were consecutively enrolled. To mitigate bias, patients with incomplete follow-up information who had undergone emergency surgery or who died during the surgery were excluded; a total of 46 patients (2.7%) were therefore excluded from the initial group.

We evaluated 1,628 patients and considered the following variables: use of intra-aortic balloon (IAB), cardiopulmonary bypass (CPB) time, creatinine variation, dialysis, type I neurological lesion, preoperative hospital stay, and age. The definitions and explanations of these factors are as follows:

• IAB: represents the whole number of implanted IABs, with no distinction regarding the time of placement (pre- or intraoperative);

• Mortality: death by any cause within 30 days of surgery.

Extreme outliers were used to exclude patients with ACs greater than the established values, which were calculated using the following formula:

The EOL value found was 2.6 mg/dL. Based on this value, 29 additional patients were excluded. The remaining 1,599 patients were separated into quartiles (Qs) based on their AC:

The risk factors and their respective cutoff points were extracted from the study by Santos et al.[5] and were used to determine the mortality rate in each quartile. The risk factors and their cutoff points were: age (65 years), preoperative hospital stay (5 days), CPB time (115 minutes), creatinine variation (0.4 mg/dL), presence of IAB, dialysis and type I neurologic lesion.

Continuous and discrete variables were transformed into categorical data according to each cutoff value (0=below cutoff value; 1=above cutoff value and death=1; alive=0). Logistic regression analysis was performed for all of the risk factors, and the P value was obtained.

Other P values were calculated using Fisher's exact test. The type I error (α) was set at 5%, and all of the tests were two-tailed. The odds ratio (OR) and the 95% confidence interval (95% CI) were calculated. The statistical software used were GraphPad 3.0 and StatsDirect 1.9.15 for WindowsTM.

The "n" value was not calculated due to the observational nature of the study.

Mortality rates in each AC stratum are shown in Figure 1. The highest AC level-QIV-was associated with greater mortality when compared to AC values in the QI group or in the QII group (P=0.0392 and P=0.0016, respectively). Tables 1 to 4 show pre-, intra- and postoperative risk factors in each AC stratum. 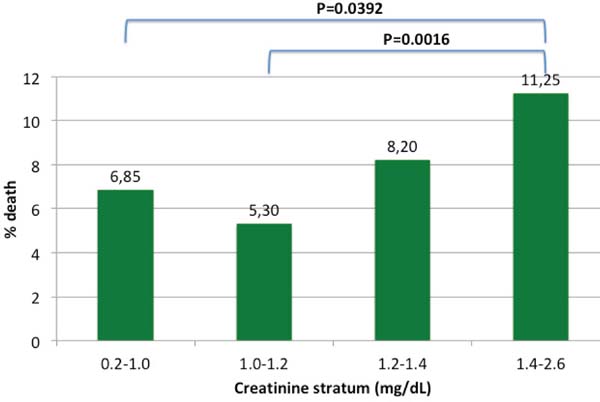 Table 4 - Mortality risk factors among ONCABG patients (n=489) with admission creatinine levels greater than or equal to 1.4 and less than 2.6 mg/dL (QIV).

In our study, IAB insertion increased mortality rates in all AC strata, with the exception of the QII group (P=0.22), a difference which was likely due to the low incidence of deaths. The results from Rampersad et al.[10] (meta-analysis with a total of 1,200 patients from 1997 to 2014) go in another direction. They stated that IAB insertion actually decreases mortality rates (RR 0.48, 95% CI 0.30-0.76, P<0.01) and major adverse cardiac and cerebrovascular events (RR 0.67; 95% CI 0.54-0.84 P<0.001). In a detailed analysis, we can see each paper included in that meta-analysis. Most part of those small papers were inconclusive for mortality and major adverse cardiac and cerebrovascular events (MACCE) and even some with high mortality rates, but when we put them together we can achieve statistic significance. Even if we had enrolled 1,599 patients, an observational study will never have the power to indicate whether a procedure is definitely related to increased mortality. For this, we will need a clinical trial or meta-analysis of clinical trials. Observational papers are very good at making hypothesis and defining the local characteristics of our patients like we did here.

In our study, dialysis was associated with increased mortality in almost all AC strata. The only AC stratum in which the difference was not significant was that of QII group, a difference that was likely due to the limited number of patients in this group (P=0.06). In the other strata, OR was found between 4.05 and 62.67. These findings are in accordance with those of Chertow et al.[14], who found that acute kidney failure associated with dialysis is an independent risk factor for death, with an OR of 27 (95% CI 22-34).

The prevalence of type I neurological lesion after ONCABG is approximately 2% to 6.1%. It is associated with chronic kidney injury, recent myocardial infarction, cerebrovascular accident, carotid artery disease, peripheral vascular disease, previous cardiac surgery, hypertension, diabetes, atrial fibrillation, preoperative infection, age greater than 75 years, severe or moderate left ventricular dysfunction, CPB time over 120 minutes, and massive transfusion[15,16]. According Stamou et al.[15], the incidence of death associated with type I neurological lesions is 4.18 times higher than among those who do not present this type of neurological lesion. Our results determined a mortality rate that was 4.85 to 72.55 times higher, except for the QI group and the QIV group. These groups likely differed because of the small number of patients (P=0.20 and P=0.63, respectively). Taking into account the severity of this type of lesion, which is generally associated with worse postoperative outcomes, Santos et al.[5] outlines some protective measures to reduce its incidence, including minimal manipulation of the aorta and maintenance of the highest gradient pressure during CPB, especially in patients with a prior history of cerebrovascular accident.

The only group in which preoperative hospital stay was 5 days or longer was the QIII group, with OR 3.05 (95% CI 1.20-7.72), P=0.0182. Our findings are in accordance with those of Santos et al.[5]. These authors pointed out an increase in mortality with an OR of 1.53 (95% CI 1.03-2.27; P=0.03). The hospital stay before surgery may be associated with clinical severity, a correlation which suggests an advanced degree of coronary involvement that may result in increased morbidity and mortality rates in the postoperative period.

Naughton et al.[17] found that age (75 years or older) is an independent risk factor for early mortality (death within fewer than 30 days), with an HR of 2.0 (95% CI 1.28-3.11), but that it is not an independent risk factor for late mortality. In our study, age (65 years or older) was associated with higher mortality rates only in the QIV group. Nevertheless, mortality did not increase in the QI and QII groups, even among patients older than 65 years (the highest age in this study was 88 years old).

No other study in the literature seems to support an association between patients with CPB time longer than 115 minutes or age above 65 years and an AC level less than 1.4 mg/dL. Nevertheless, these results must be evaluated with caution, although not with skepticism. If these results are found to be reproducible by other authors, they may possibly change certain practices in cardiovascular surgery, leading us to rethink the indication of faster ONCABG and the decision to disregard one or more grafts. These results should also lead us to rethink some of the contraindications for this type of surgery, especially for elderly patients. The analyses of these variables in each creatinine stratum by other authors are necessary to confirm or reject our findings.

This study has several limitations. It is based on a large institutional database and results that were collected prospectively, and therefore we are unable to access the influence of any variable outside the database. The observational nature of this study makes it useful for formulating hypotheses, but the results are not strong enough to change routines. Other papers are needed to certify our findings.

Creatinine levels play an important role in ONCABG mortality. The association between selected risk factors and higher AC values leads to a worse prognosis. Conversely, lower AC values were associated with a protective effect, even for elderly patients and with longer CPB times.

We thank Dr. Renato Braz de Araújo for his priceless help in editing the final manuscript and Danielle Deremo Cosimo for her English translation and language revision services.

MABO Conception and design of the work; acquisition, analysis, interpretation of data for the work; drafting the work and revising it critically for important intellectual content; final approval of the version to be published

CAS Interpretation of data for the work; revising it critically for important intellectual content; final approval of the version to be published

ACB Acquisition, analysis, interpretation of data for the work; final approval of the version to be published

AHD Acquisition, analysis, interpretation of data for the work; final approval of the version to be published

PHHB Acquisition, analysis, interpretation of data for the work; final approval of the version to be published

MFG Conception and design of the work; revising it critically for important intellectual content; final approval of the version to be published

DMB Conception and design of the work; revising it critically for important intellectual content; final approval of the version to be published