Objective: To evaluate the predictive value of mean perfusion pressure (mPP) in the development of acute kidney injury (AKIN) after transcatheter aortic valve implantation (TAVI).
Methods: One hundred and forty seven consecutive patients with aortic stenosis (AS) were evaluated for this study and 133 of them were included. Mean arterial pressure (mAP) and central venous pressure (CVP) were used to calculate mPP before TAVI procedure (mPP = mAP-CVP). The occurrence of AKIN was evaluated with AKIN classification according to the Valve Academic Research Consortium-2 recommendations. The patients were divided into two groups according to the receiver operating characteristic (ROC) analysis of their mPP levels (high-risk group and low-risk group).
Results: The AKIN prevalence was 22.6% in this study population. Baseline serum creatinine level, glomerular filtration rate, amount of contrast medium, and the level of mPP were determined as predictive factors for the development of AKIN.
Conclusion: The occurrence of AKIN is associated with increased morbidity and mortality rates in patients with TAVI. In addition to the amount of contrast medium and basal kidney functions, our study showed that lower mPP was strongly associated with development of AKIN after TAVI.

AUC = Area under the curve

Aortic stenosis (AS) is one of the most common cardiac degenerative valvular diseases, with a prevalence of 3-5% in patients above 75 years of age[1]. Surgical aortic valve replacement (SAVR) is currently considered the gold standard treatment for severe symptomatic AS[2]. Transcatheter aortic valve implantation (TAVI) has emerged as an alternative to surgery for patients with severe symptomatic AS, particularly for those who were considered at intermediate to high risk for surgery[3,4]. Since its introduction in 2002, more than 200,000 patients have undergone TAVI globally.

In this study, 147 consecutive patients who had undergone TAVI procedure in our clinic between June 2013 and December 2015 were evaluated. One hundred and thirty three of them met the inclusion criteria and were included in this study. Patients who had invasive blood pressure monitorization, jugular venous catheter, and were hemodynamically stable were included in our study. Patients who had undergone renal replacement therapy, presented glomerular filtration rate (GFR) <30 ml/min/1.73 m2, had decompensated heart failure, received inotropic agents, had intra-aortic balloon pump, and received CM within the last 48 hours were excluded. Patients who had undergone additional procedures or received additional CM due to vascular complications, and had chronic pulmonary diseases or chronic liver diseases were also excluded from the study. Intravenous hydration therapy was started in patients with GFR <50 ml/min/1.73 m2 for 12 hours before the procedure and continued for 24-48 hours after TAVI. Patients' daily blood tests including creatinine were checked for three days before and three days after TAVI.

Blood pressure of every patient was monitored using invasive monitorization during the 12 hours before TAVI procedure. Also during this period, mean arterial pressure (mAP) calculated by monitors was entered in patient files. Central venous pressure (CVP) was monitored with catheters implanted by anesthesiologists in all patients before valve implantation. The mPP was calculated using the formula MPP = mAP-CVP.

The Valve Academic Research Consortium-2 (VARC-2) criteria were used to evaluate any complication occuring in TAVI patients[7]. VARC-2 recommends that the AKIN system should be used to diagnose AKIN. According to the AKIN system:

Severe AS was diagnosed with echocardiographic methods. The situations of average aortic gradient > 40 mmHg, aortic valve area (AVA) <1 cm2, and valve area index (valve area/body surface area) <0.6 cm2 were considered to be severe AS[8]. The balloon-expandable Edwards Sapien XT valve (Edwards Lifesciences, Irvine, California, USA) was used for TAVI process. Vascular occlusion device (ProStar XL, Abbott Laboratories, North Chicago, Illinois, USA) was used in eligible patients in terms of femoral artery diameter and anatomy. The surgical cut-down method was applied in patients who were unsuitable for using iliac and femoral artery anatomy vascular closure device. Transoesophageal echocardiography and multislice computed tomography (CT) tests were done to determine the diameter of the aortic bioprosthesis implanted. In all patients, clopidogrel 75 mg and acetylsalicylic acid 100 mg were started before TAVI procedure. İohexol (Omnipaque, GE Healthcare), a nonionic low-osmolar monomeric CM, was used as the opaque material. The amount of CM was recorded during all TAVI procedure. Examinations such as CT and coronary angiography that required administration of CM, except TAVI procedures, were performed at least 72 hours before. Daily kidney function tests of all patients were monitored in our centre from admission to discharge. Creatinine levels were checked in the second week, and the first, third, sixth and twelfth month after TAVI procedure (COBAS Integra 400 plus, Roche Diagnostics).

The patients were prospectively followed during one year after TAVI. The informed consent form was obtained from each subject, and the study was conducted in accordance with the Helsinki Declaration. The study protocol was approved by the local ethics committee.

Based on the receiver operating characteristic (ROC) analysis, patients who had lower mPP values (<72 mmHg), which was determined as the threshold value for AKIN development, were included in the high-risk group (HR-G), and those who had higher mPP values (≥72 mmHg) were included in the low-risk group (LR-G). Additionally, characteristics of patients with normal renal functions (NRF) and those who developed AKIN were evaluated.

A balloon-expandable Edwards SAPIEN XT valve was implanted via transfemoral access in all patients. The mean radiation time was 7.6±3.1 min. Mean CM and duration of procedure were 143.4±22.7 ml and 69.2±28.1 min, respectively. There weren't any significant difference between the two groups according to the numbers and durations of the rapid ventricular pacing.

Table 2 - Baseline characteristics in patients with or without AKIN (NRF group).

Table 2 - Baseline characteristics in patients with or without AKIN (NRF group).

In univariate analysis, mPP, left ventricle ejection fraction, baseline creatinine, GFR, red blood cell transfusion, amount of CM, SBP, and DBP were found to be significantly associated with AKIN (P<0.01 for all parameters). Thus, the multivariate regression analysis was performed with these variables; baseline creatinine, baseline GFR, amount of CM, and mPP were found to be significant predictors of AKIN (Table 3). The ROC analysis of the significant variables in multivariate regression analysis revealed that the cut-off value of mPP was 72 mmHg to predict the development of AKIN (AUC, 0.813; 95% CI, 0.721-0.905; sensitivity, 72%; specificity, 84%; Figure 1). Mortality rates were significantly higher in AKIN patients. Kaplan-Meier survival curves for patients with and without AKIN (NRF group) showed a significantly lower survival rate up to 1 year in the overall AKIN group (16.6% vs. 0.03% log-rank, P=0.02; Figure 2). 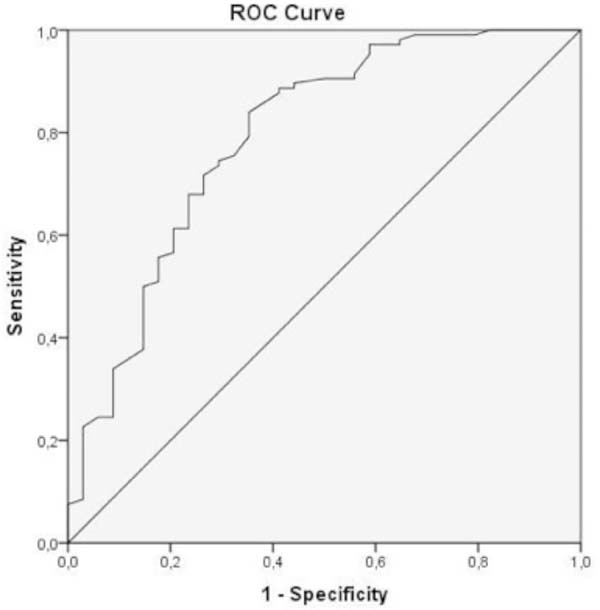 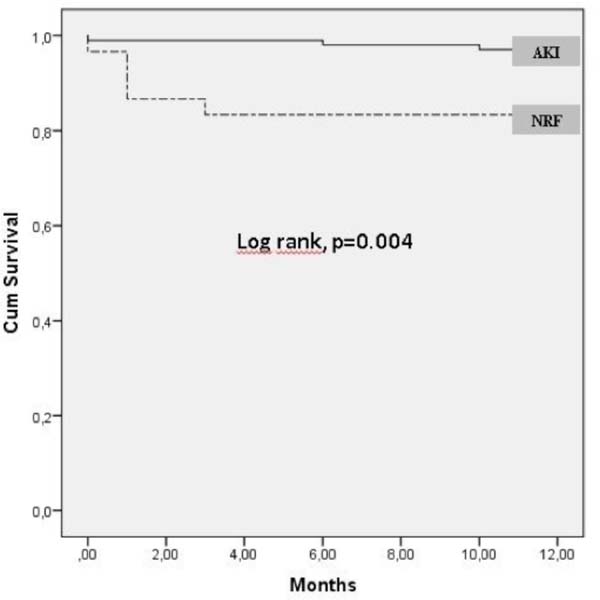 In our study, we found out that baseline creatinine, GFR, amount of CM, and lower mPP values were significantly associated with the development of AKIN in patients with TAVI.

Development of AKIN is strongly associated with increased major adverse cardiac events after TAVI procedure[9-11]. While 40% of the patients suffer from AKIN after SAVR, prevalence of AKIN ranges from 3.4% to 57% after TAVI procedure[10,12,13]. In accordance with previous studies, in our study 33 (21.2%) patients developed AKIN after TAVI. Excessive CM usage, hypotension, rapid ventricular pacing, balloon aortoplasty, valve implantation, and embolisation of aortic plaque are considered intra-operative risk factors for AKIN after TAVI[12,14].

As it is well known, CM reduce oxygen availability to the renal medulla and cause renal ischemia[15]. Several studies demonstrated that CM/GFR and CM/creatinine clearance (CrCl) rates in invasive procedures are predictors of renal failure[16-18]. It can be useful to calculate basal GFR and CrCl before TAVI, to be used to calculate upper limits for CM. The mAP might be decreased below 50 mmHg during rapid ventricular pacing. These hypotensive stages can contribute to the development of AKIN. Therefore, number and duration of rapid ventricular pacing used for our patients during TAVI were recorded in our study. Although basal kidney function tests are important for impairment of renal function, other factors, such as mPP, amount of CM, and rapid ventricular pacing, should be kept in mind to predict renal impairment.

In addition to many factors affecting the development of AKIN, hemodynamic parameters of patients before an invasive procedure are also important indicators of potential renal complications. Renal hypoperfusion is the most important cause of AKIN after SAVR and TAVI[11,19]. Renal perfusion pressure is the most important predictor of renal blood flow. A normal renal perfusion pressure should be between 60 and 100 mmHg[20]. However, there isn't any non-invasive method that can directly measure it. Renal perfusion pressure can be estimated using mPP, mAP, and CVP levels. Especially, mPP calculated with mAP and CBP is shown to be an important indicator for the continuation of NRF[21]. A strong association has been demonstrated between mPP levels and GFR in various diseases[22]. Based on the study results, mPP values obtained with invasive monitorization in advanced AS patients were found to be a significant factor in predicting the development of AKIN. The predictive value of AKIN development was calculated as 72 mmHg using ROC analysis (Figure 1). The percentage of AKIN was much higher in the HR-G group (42.3% vs. 9.9%, P<0.001). The calculation of mPP is based on the difference between mAP and CVP. Since mAP values of the HR-G group were lower and CVP values were higher, mPP values in this group were low (Table 1). The value of mPP is more closely associated with renal perfusion pressure, compared to mAP and CVP[21,22].

Limitations of the Study

The main limitation of this study is the small number of patients included. Additional information can be obtained in longer follow-up periods. In our study, TAVI using balloon expandable prosthesis was performed, and it would be useful to conduct similar studies with a self-expandable prosthesis.

These findings led to the conclusion that among the patients with similar renal functions, who received a similar amount of CM, those with lower mPP are at higher risk for AKIN development. A model was created with regression analysis to identify the factors affecting the development of AKIN in our study.

In our study, the amount of CM, basal kidney function tests, and lower mPP levels (mPP <72 mmHg) were strongly associated with the development of AKIN after TAVI. Further studies are needed to evaluate the association between mPP and AKIN in patients treated with TAVI.

IG Analysis and interpretation of data; drafting the paper; revising the work; approval of the final version

LC Analysis and interpretation of data; drafting the paper; revising the work; approval of the final version