Evaluation of Anomalous Coronary Arteries from the Pulmonary Artery

The findings and timeline for symptom development may vary depending on the effectiveness of the myocardial collateral branches concurrent with pulmonary artery pressure decrease. Some patients may be completely asymptomatic whereas others may experience death in the early period due to heart failure, valvular insufficiencies or myocardial infarction[1,2].

The definitive treatment is surgery to normalize myocardial perfusion, after which, progressive remodeling and improvement in left ventricular (LV) function may be seen. Depending on the preference of the cardiac unit, either direct anastomosis may be performed on the anomalous coronary artery from the pulmonary artery to the aorta or, for patients in whom direct transfer of the coronary artery is not feasible, an intrapulmonary aortocoronary tunnel, as described by Takeuchi, may be implemented successfully[3-6].

This study evaluated presentation findings, diagnosis, treatment methods, and follow-up results of patients at a single tertiary center who were diagnosed with anomalous coronary arteries from the pulmonary artery.

For this retrospective study, the center’s computer database was searched for all patients diagnosed with anomalous coronary arteries from the pulmonary artery between January 1, 2012 and January 1, 2016. Cases with additional congenital heart diseases were excluded.

ECGs were evaluated according to the literature for sinus tachycardia, presence of pathological Q wave, ST elevation, ST depression, etc. ECHO findings before surgery, during ICU follow-up, and after hospital discharge were compared. Twodimensional, M-mode, and Doppler ECHOs were performed using standard imaging techniques, in accordance with the recommendations of the American Society of Echocardiography.

Surgical techniques, namely the Takeuchi procedure and coronary implantation, were applied in accordance with the literature.

Patients were transferred to the ICU intubated, and mechanical ventilator support was initiated. In some patients, sternal closure was delayed.

In the ICU, all patients were monitored non-invasively by pulse oximetry, ECG, end-tidal capnography, and cranial near infrared spectroscopy (NIRS) and invasively by arterial blood pressure, central venous pressure (CVP), and left atrial pressure. Milrinone (0.5 microgram/kg/min) and low doses of epinephrine (0.05 microgram/kg/min) were the preferred inotropic support, beginning in the first postoperative hours. Noradrenaline support was added if necessary. Fentanyl and midazolam were used for sedation and analgesia. All patients were started on total parenteral nutrition (TPN) in addition to minimal enteral feeding within the first postoperative day.

Excessive volume loading was avoided. Vasodilator therapy, core cooling, neuromuscular blocking, and peritoneal dialysis were initiated in cases of low cardiac output that did not respond to inotropic support. Daily postoperative ECHO was performed in the pediatric intensive care unit (PICU). Tapering of postoperative medication, including inotropes, and weaning from the mechanical ventilator were decided on case by case, based on clinical evaluation and LV function on ECHO.

This retrospective study included 12 patients, 10 with ALCAPA and 2 with ARCAPA. There were 8 males and 4 females. Median age at diagnosis was 4 months (range, 1 month to 10 years old), and median weight was 5.5 kg (range, 3-30 kg). The most common complaints were murmur (n=7) and respiratory distress (n=5). In 4 cases, the initial diagnosis was dilated cardiomyopathy. Table 1 shows the patients’ demographic data. 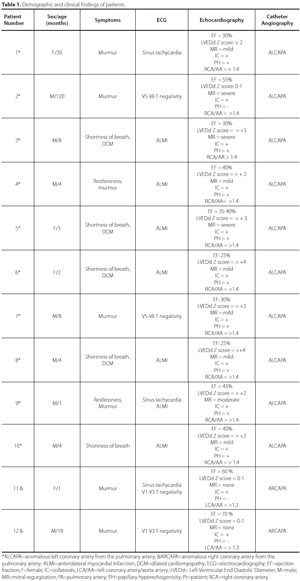 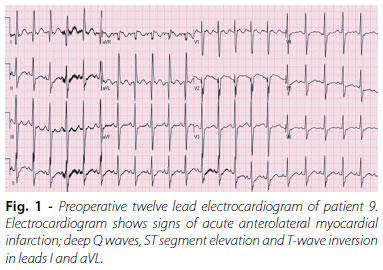 Of the 10 patients with ALCAPA, 9 had varying degrees of LV dilatation and dysfunction. ECHO revealed varying degrees of mitral valve regurgitation (Figure 2) and collateral blood flow on the interventricular septum in all cases, papillary muscle hyperechogenicity in 9 cases, dilated right coronary artery (RCA) in 8 cases, and retrograde diastolic flow toward the pulmonary artery in 4 cases. At the initial ECHO examination, coronary arteries of 4 patients were erroneously thought to originate from the aorta.

In the 2 patients with ARCAPA, LV systolic and diastolic diameters were within the normal limits. In both cases, the left coronary arteries (LCAs) were dilated secondarily. One patient with ARCAPA had had previous ECHO and catheter angiography, which had diagnosed coronary-cameral fistula.

All patients were evaluated with cardiac catheterization and angiography (Figure 3). 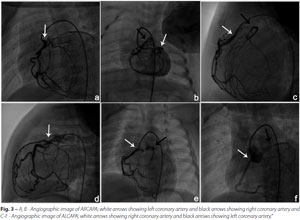 Among the 10 patients with ALCAPA, 8 underwent direct implantation of the LCA into the aorta and 2 underwent the Takeuchi technique. In the 2 patients with ARCAPA, coronary reimplantation was applied. Median surgery time was 140 minutes (range, 76-375 minutes). In 3 cases, closure of the sternum was delayed and, in those cases, mean closure time was 96 hours. 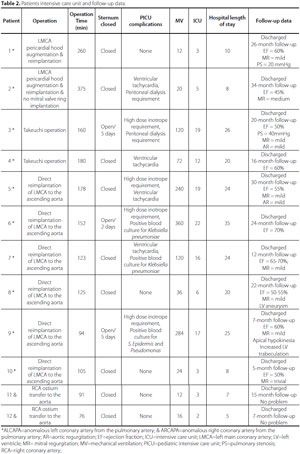 ALCAPA is a rare disorder, affecting 1 in 300,000 live births and representing approximately 0.5% of congenital heart defects[6,7]. Presentation and diagnosis timelines for ALCAPA vary depending on pulmonary vascular resistance and the presence of collateral vessels between the right and left coronary artery systems. A wide range of symptoms has been reported in the literature, including an one month-old baby with heart failure symptoms and an asymptomatic 53-year-old who was diagnosed incidentally[8]. A Danish study of 9 patients with ALCAPA reported that 77% had heart failure symptoms, including shortness of breath and wheezing, while the remaining 23% were asymptomatic at presentation[9]. A Chinese study of 27 cases reported acute heart failure (n=15), pneumonia (n=7), and cardiac murmurs (n=5) as presenting symptoms[10]. In the present study, 60% of patients presented with murmur, 40% with shortness of breath, and 30% were asymptomatic.

Because myocardial ischemia develops over time in an anterolateral distribution, pathological Q waves can be seen in derivations representing the region, namely the DI, aVL, and V4-V6. In patients with extensive collateral circulation, there might be nonspecific ECG changes[5]. In patients with impaired LV functions, typical ECG changes should indicate the presence of an anomalous coronary artery[5,6].

Rodriguez-Gonzalez et al.[1] conducted a study of 12 patients and reported that 6 had specific ECG changes compatible with acute lateral myocardial infarction. In the present study, the ECGs of 7 patients revealed pathological Q waves in the DI, aVL, and V6. The ECGs of the other 5 patients showed nonspecific changes.

Various surgical methods can be used to repair an anomalous coronary artery from the pulmonary artery, all of them aiming to establish a system with two coronary arteries. One of the most common methods is direct reimplantation of the coronary artery into the aorta. The other is creating an aortopulmonary window that directs blood flow from the aorta to the LCA (Takeuchi). After those procedures, no matter how impaired the ventricular functions had been, myocardial function can quickly heal[12,13].

ARCAPA, a rare coronary anomaly, was first described in 1885. It represents approximately 0.002% of all congenital heart diseases. Unlike ALCAPA, it is often asymptomatic during infancy and early childhood. During adolescence and adulthood, presentation often consists of a murmur and it rarely includes chest pain, heart failure, arrhythmia, or sudden death. Time to diagnosis shows a wide distribution, from 1 month old to 90 years old. There is no consensus in the literature regarding treatment methods and diagnosis times in ARCAPA patients[18].

Although there are reports of various treatment methods, including surveillance, medical therapy, surgery, and surgical ligation, due to the 10-18% risk of sudden death, most authors advocate creating a dual coronary circulation by direct reimplantation, even in asymptomatic patients[18,19]. In the present study, both of the ARCAPA patients were asymptomatic, but underwent surgery, one at 9 months old and the other at 18 months old, in accordance with the literature.

Reported mortality rates range from 0-16%[20-22]. The literature suggests that the main reasons for mortality are low cardiac output and ventricular arrhythmias, and it advises using advanced life-support systems to reduce mortality. In the present study, 3 patients developed low cardiac output and 4 developed ventricular tachycardia. No ECMO was required, nor was there any early mortality.

The most important limitations of the present study were the small number of patients included and its retrospective nature. In addition, the follow-up period was relatively short compared with those in the literature.

Anomalous coronary arteries from the pulmonary artery may present with various clinical, ECG, and ECHO findings. The condition can be successfully treated by surgery if accompanied by early diagnosis and effective, appropriate ICU follow-up. Coronary artery origins should be carefully evaluated, especially in patients with dilated cardiomyopathy.

19. Williams IA, Gersony WM, Hellenbrand WE. Anomalous right coronary artery arising from the pulmonary artery: a report of 7 cases and a review of the literature. Am Heart J. 2006;152(5):e9-17.

No conflict of interest.