Aortic stenosis (AS) is a common valve disease and if left untreated, the prognosis of severe AS is poor. A surgical approach involving open heart surgery with low levels of mortality and acceptable long-term morbidity levels has been successfully applied in severe AS. Nonetheless, the risk of perioperative morbidity and mortality increases in elderly patients or those with accompanying diseases and they may be regarded as inoperable.

Transcatheter aortic valve implantation (TAVI) was initially introduced by Cribier and colleagues and, currently, TAVI represents a valid therapeutic option for patients with severe aortic stenosis who are inoperable or are at very high risk for conventional surgery[1,2]. TAVI is performed using one of two different approaches: the retrograde transfemoral (TF) approach via the femoral artery or the antegrade transapical (TA)[3].

Various scales can be employed in the evaluation of patients' quality of life and health outcomes. One of the most widely used is the Medical Outcome Study Short Form-36 (SF-36). This is an easily applied test that provides important information about quality of life assessment in patients undergoing open heart surgery and percutaneous cardiac procedures[6]. SF-36 consists of 36 items, including 8 separate health-related dimensions. The form is divided into the following domains: physical function (10 items), social function (2 items), task restrictions due to physical problems (4 items), task restrictions due to emotional problems (3 items), mental health (5 items), vitality (4 items), pain (2 items), and general health (5 items). The items in SF-36 inquire into positive or negative status concerning health and are assessed based on the preceding 4 weeks. Item scores are coded for each dimension and converted into a scale from 0 (worst health status) to 100 (best health status). There have been limited data concerning the contribution to patients' quality of life of TAVI.

The purpose of this prospective study was to use the SF-36 test to assess quality of life in patients over 70 years of age undergoing aortic valve replacement (AVR) or TAVI due to AS in our hospital, before the procedure and at the 3rd postoperative month.

AVR was planned on 79 patients aged over 70 diagnosed with advanced aortic stenosis between January and June 2014. Approval for the study was granted by the hospital's research ethics committee. Participants were informed about the study and signed an informed consent form.

All patients were assessed in terms of aortic structure, porcelain aorta, penetrating ulcer, and suitability of iliac arteries for catheter using computed tomography angiography. Patients were investigated in terms of age, sex, hypertension, diabetes mellitus (DM) and history of cigarette use, and parameters obtained from tests, analyses and examinations were scored using the European System for Cardiac Operative Risk Evaluation (EuroSCORE) risk scoring system. A hospital council, comprised of specialist cardiologists, anesthesiologists and radiologists, discussed every patient's case and decided on the type of procedure to be performed.

Only patients with advanced AS aged 70 or over were enrolled in the study. Patients with other cardiac procedures in the same session besides AVR were excluded.

Prior to both procedures, patients were informed about how the procedure would be performed and its possible risks. AVR using St. Jude Medical® Mechanical heart valve (St. Jude Medical Inc.; Minneapolis, MN, USA) and TAVI using the Edwards Sapien valve (Edwards Lifesciences, Irvine, CA, USA) were performed under general anesthesia and using standard procedures. Patients were taken to the intensive care unit after both procedures and remained there for at least one night. Patients with no complications and who improved on the first day were discharged.

Statistical analysis was performed on IBM SPSS Statistics 22 (IBM SPSS, Turkey) software. The Shapiro Wilks test was used to determine normal distribution of data. Descriptive statistical techniques were used to analyze the study data (mean plus standard deviation). In addition, the Mann Whitney U test was used to compare parameters between the two groups and the Wilcoxon signed test for intragroup was used for pre- and postoperative comparisons. Chi square test, Fisher's exact chi square test and Yates continuity correction were used in the comparison of qualitative data. A value of P<0.05 was considered statistically significant. 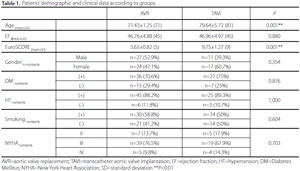 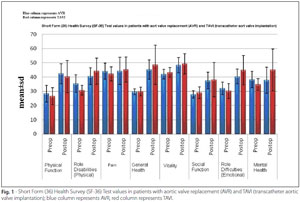 There was no difference between AVR and TAVI in terms of emotional task restriction in the preoperative period, but the level of positive change in the TAVI group was significantly higher than that in the AVR group (14.4±11.9 vs. 8.5±6.4; P=0.035) (Table 2, Figure 1).

The positive improvement in this study of patients with advanced AS aged over 70 in post-procedural physical and emotional task restriction scores in the TAVI group was higher than that in the AVR group. Although preoperative mental health scores in the AVR group were higher than those of the TAVI group, there was a very high increase in post-procedural mental health scores in the TAVI group. No significant differences in quality of life improvements were determined between the two groups in the other parameters, including pre- and postoperative pain, vitality, social functioning, physical functioning, and general health scores. Improvement in both disease-specific symptoms and general health has been observed following TAVI and AVR in patients with advanced AS. The effect on quality of life of procedural techniques has also been investigated in patients undergoing TAVI. Shorter recovery and higher levels of improvement in quality of life have been reported in patients undergoing transfemoral TAVI compared to those undergoing transapical TAVI requiring thoracotomy[8].

Levels of improvement in quality of life in the postoperative period in patients unsuitable for transfemoral procedures and undergoing transapical were not higher than those in patients undergoing AVR. While a small thoracotomy incision is performed in the transapical approach, the absence of a positive change in quality of life that might be expected in transapical TAVI compared to classic AVR, which involves median sternotomy and cardiopulmonary bypass, may be attributed to greater length and severity of thoracotomy-related postoperative pain compared to those in sternotomy, resulting in greater restriction of the patient[8].

The greatest benefit in quality of life following TAVI was observed in patients' physical functions, and the least in body pain. Bekeredjian et al.[9] reported that TAVI had positive effects on quality of life in mental terms in patients aged over 80.

In our study, the greatest benefit observed in the TAVI group was in general health functions and the least was in body pain. TAVI was also observed to bestow significant positive benefits in terms of mental health.

One prospective study determined that quality of life at the 3rd month following TAVI increased significantly compared to the preoperative period; it also showed an increase in patients' NYHA functional capacities[10].

Age-related activity restrictions occur in patients aged 70 years and over. One study comparing preoperative and 6th month postoperative quality of life using SF-36 in patients with a mean age of over 70 undergoing AVR reported positive changes at the 6th month in physical functioning, social functioning, physical health-related task restriction, vitality, and health status. That same study also stated that functional capacity decreased from NYHA class 3 to class 1 in 82% of patients[11].

Another study of patients at more advanced ages (80 years old or more) undergoing AVR reported a particular increase in functional capacities independently of age in the postoperative period in the great majority of patients. Significant improvements were also observed in general and mental health, social functioning, emotional task, and pain[12].

In our study, significant, positive changes were determined in all parameters, apart from pain and mental health, in all the patients in the AVR group following the procedure.

No significant difference has been reported between mortality levels in the 1st month and in the 1st year due to cardiac or any other causes following TAVI or AVR in patients with advanced aortic stenosis and high comorbidity[13].

In terms of limitations, our findings are limited to the early period in patients undergoing TAVI and AVR. Additionally, SF-36 was used in the measurement and evaluation of patients' quality of life. We used this form because it is easy to apply, contains easily understood questions and, in particular, determines the degree of dependence on another person in patients' daily lives. The fact that, apart from assessment of quality of life, other tests such as hospital anxiety and depression scales were not administered represents another limitation.

Advanced AS is a mechanical problem that can severely affect the individual, both mentally and physically. Whether this mechanical problem is overcome with AVR or TAVI, the procedures in both groups allow patients' symptoms to be resolved, life expectancy to be extended and quality of life to be improved.

The increase in quality of life parameters in the TAVI group at the end of the 3rd month was greater than that in the AVR group. This may best be attributed to TAVI being a non-invasive method and there being no need for cardiopulmonary bypass during the procedure.

CK Conception and study design; execution of operations and/or trials; analysis and/or data interpretation; writing of the manuscript or critical review of its content; final manuscript approval

TK Final approval of the manuscript