We present the case of a 68-year-old male patient, who had been submitted to correction of aortic type-A correction 10 years previously. During outpatient follow up he presented with intense sharp thoracic pain irradiating to the dorsum. He was in a good general health, eupneic, afebrile in functional class I (NYHA). His thorax was symmetrical and the heart rhythm was regular with two clicks. The pulmonary auscultation was symmetrical without adventitious sounds. The abdomen was without change. The pulses were palpable in the four limbs with a slight reduction in the left upper limb and lower limbs.

The electrocardiogram showed sinus rhythm with a heart beat of 64 bpm. The QRS complex axis was +30º. The T-wave was negative at D3 and AVF suggestive of inferior subepicardial ischemia. Alterations of ventricular repolarization with rare isolated polymorphic extrasystoles were also observed. 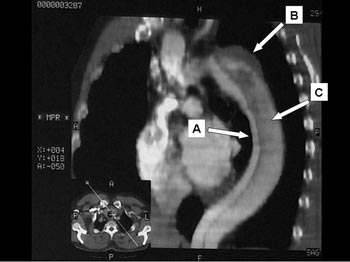 The radiogram showed the cardiothoracic index within normal limits. Metallic sutures on the sternum, normal transparency of the pleuropulmonary fields and free diaphragmatic domes were observed. Additionally elongation, calcification and ectasia of the thoracic aorta and osteophytes in the thoracic column were identified.

A transesophageal echocardiography demonstrated situs solitus with dextrocardia. The veno-atrial, atrio-ventricular and ventriculo-arterial connections were concordant. Moderate annulo-aortic ectasia and moderate concentric hypertrophy of the adapted left ventricle with an ejection fraction of 58% were seen. The aortic valve had slight regurgitation. The ascending aorta had a diameter of 41 mm, transverse aorta 35 mm and the descending aorta 46 mm. The latter two had double lumens and blood flows as well as partial thrombosis in the proximal one third.

A coronary cineangiography was not necessary. The echocardiographic findings were complemented with helicoidal computed tomographic imaging which clearly showed type-A aortic dissection involving the aortic arch, root of the brachiocephalic trunk and all the descending thoracic (55 mm) and abdominal arteries (Figure 1).

Median sternotomy was performed carefully dissecting the adherences and cardiopulmonary bypass was established with cannulation of the ascending aorta through the pericardium tube implanted in the previous surgery together with bicaval cannulation. Profound hypothermia at 18 ºC and total cardiac arrest were achieved. The false lumen was identified as was the site of reentry of the dissection, 1 cm above the ostium of the brachiocephalic trunk. The release of a self-expanding 30 mm by 115 mm endoprosthesis in the descending aorta was chosen. The arch was repaired with a corrugated bovine pericardium tube distally anastomised to the endoprosthesis and proximally to the preexistent tube. The brachiocephalic trunk was treated and anastomised to the corrugated tube. Myocardial preservation was achieved with low-volume continuous tepid retrograde sanguineous cardioplegia. The cardiopulmonary bypass time was 240 minutes, with 78 minutes of total cardiac arrest. The patient had an event-free evolution without neurological sequels, was extubated 24 hours after the surgery and released from hospital on the 10th postoperative day.